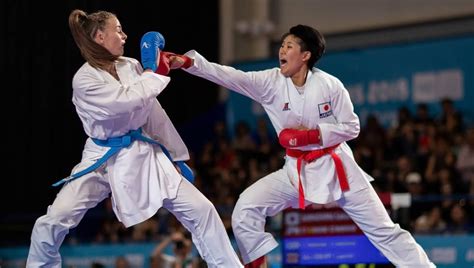 The Tokyo 2020 Olympics, has finally started, a year late. For us karateka, this will be an extra special one, as Karate is in the Olympics for the first time. The qualifiers for both Kata and Kumite start on Thursday 5th August 2021.

We will be in for a Karate spectacle, as the best Karateka from around the world compete against each other in the hope for Olympic Gold. There will be no team kata present at this Olympics, which is a shame, because the bunkai section of the kata performance is always a great watch, regardless of how realistic the moves are. Despite this, there is more than enough talent for us to watch over the next week.

Judo and Tae Kwon Do, which already feature regularly in the Olympics, focus on the fighting side of their art. Karate adds another dimension, as there is also Kata in this Olympics. I think people who are not in the Karate world may find it harder to appreciate the intricacies of a Kata performance, but I am sure there are those that will.

To see the variety of different Kata and styles will be the most interesting aspect of the competition. We have been learning Gojushiho Sho in our recent Kata Workshops, so I’m curious  to see who performs this Kata, and compare it to how we have been learning it in class.

What I notice about all of the Olympic athletes, is just how focused they are on their training and performance. There are numerous athletes competing in multiple events, which must be exhaustive to their body, yet they are able to push on. I think of all the sacrifices they’ve made in their life in order to become an Olympic Athlete. I am in awe of these people, as they push the boundaries of what is possible.

I am most curious to see how the BBC will present the Karate to the British public. We are used to seeing all sorts of analysis, and computer generated graphics for football matches, and other popular sports, but I wonder how this will compare to the coverage for Karate. What a great opportunity to show the world the sport side of our Martial Art.

Watching the Tae Kwon Do competition over the weekend left me a little disappointed. The fights looked messy, and the skill of striking a target has been reduced to trying to toe-poke your opponent in their head. Punches to the body were a last resort to score points when the fighters inevitably crashed into each other. If Tae Kwon Do is tolerated in the Olympics, I hope Karate will be well received.

What are you looking forward to watching the most? How do you think Japan will do in the first Olympic Karate competition? How about Great Britain? We’ve been doing great in many other categories, how will we fair in Karate?

The full Karate schedule can be found here: