Over the past few months a group of our students at Zen-Shin have been putting in the extra work to prepare for the German Open Championships which took place on the 25th June. The weeks flew by and next thing you know we were in the airplane on our way to Frankfurt. It is safe to say that we returned back to England with a very proud Sensei.

Here is a write up made for the newspaper of our success at the competition from two of our champions’ parent -Jane Garratt.

“Zen Shin Martial Arts Academy, a karate club based in Birmingham with clubs all over the city is celebrating the achievements of it’s students from their Mere Green and Erdington clubs after an intrepid group of 10 took Europe by storm in the German Open Karate Championships in Frankfurt.

The team with ages ranging from 10 to 17 years old led by Sensei John Richards and coached by Sensei Pansy Wright and Sensei Afiya Richards exceeded expectations in a packed arena of over 1500 competitors from all over Europe winning 9 first place trophies, 8 second place trophies and 9 third place trophies.

With a mix of ages and differing experience the group excelled in every category. Ruaidhri Fleming aged 10 and Christian Bazyluk aged 12 both in their first international were not intimated by the strength of the competition with Ruaidhri getting a 2nd and 3rd place in kata and Christian coming 2nd in fighting, 2nd in individual kata and 3rd in pairs kata with more experienced competitor Joshua Billings aged 11.

This being Joshua’s second international competition his previous experience served him well when he achieved a 3rd place in pairs kata with Christian and an incredible and very hard fought 3rd place in karate fighting (kumite) his first international medal in that discipline.

It was the turn of the girls and another competitor new to the international arena Shania Arthurs who exceeded all expectations getting a 2nd place in individual kata, 2nd place in hard style kata and a 3rd in fighting in the female 13 to 17 years category. Shania was the youngest in her category but merited a special mention from the head referee for her excellent technique and spirit.

Moving up a category to the mid teen boys it was obvious that Sean Hope (aged 12) and Upraaj Bains (aged 13) both experienced competitors in an international arena had been practicing hard. Sean achieved an incredible four 1st place trophies in traditional kata and hard style kata and also with his musical weapons forms and freestyle forms. Sean also achieved a 2nd place in pairs kata with Upraaj Bains who not only had fantastic timing and technique as a pair but was also outstanding in his weapons category coming first in traditional bo after impressing the judges with his precision and technique.

The mid teen boys James Holloway (aged 14) and Lucas Deakin (aged 14) did not let the team down managing to secure an impressive 4th place in pairs kata. James however managed to get a further 3rd and 2nd place trophy in kata and weapons. However, it was in his fighting that he excelled to get a fantastic first place trophy in an exciting and technically excellent fight.

The most experience international competitors, siblings Lauren Garratt (aged 17) and James Garratt (aged 14) who have been competing internationally since 2009 added to their extensive trophy collection. Lauren who was sponsored by Queen Marys High School came 1st in kata in a group of 15 and merited a special mention from the referee. She also came 2nd in her weapons category. James attained two 3rd places in his weapons category but it was in the pairs kata category during which they worked together for the first time that they achieved 1st place and were commended again by the judges for their exceptional performance. 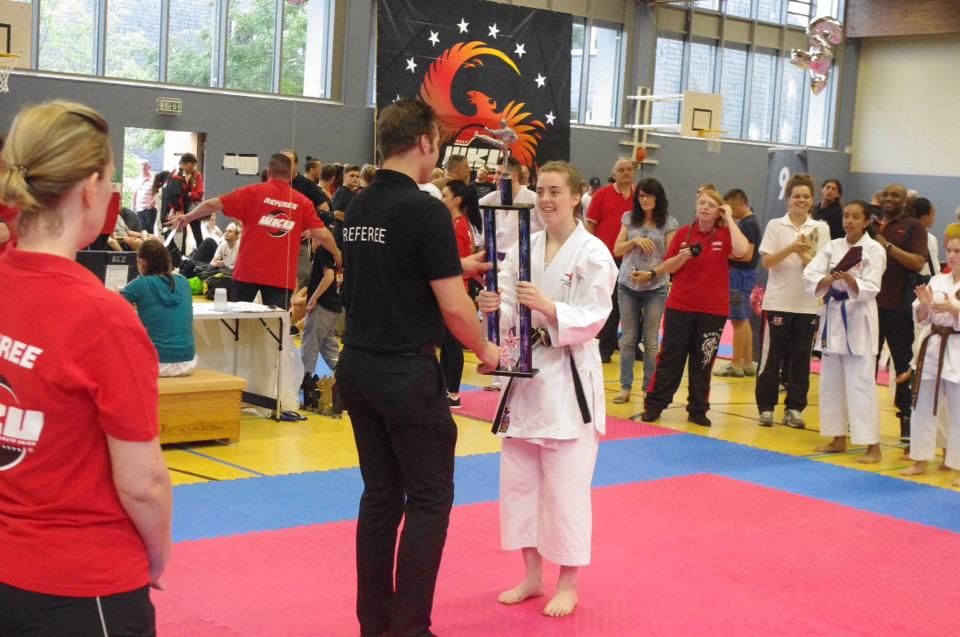 Sensei John Richards stated “ I am very proud of my team and they have all performed excellently but also have been very sporting and true to the ethos of karate being respectful and disciplined. We are now planning our next adventure”.